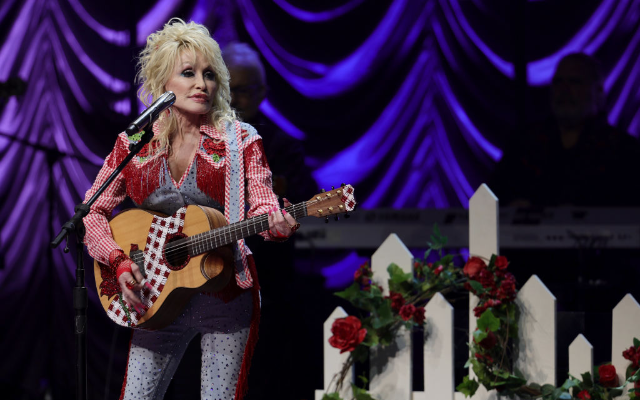 In news that surprised no one, Dolly Parton made it into the Rock and Roll Hall of Fame.  She’ll be inducted November 5th, along with Eminem, Lionel Richie, Carly Simon, Eurythmics, Duran Duran, and Pat Benatar.

She was nominated earlier this year, but withdrew her name because she didn’t think she earned the right.  But the Hall rejected that request.

She shared this statement: “I’m honored and humbled that I’ve been inducted into the Rock and Roll Hall of Fame.  Of course I will accept it gracefully.  Thanks to everyone that voted for me and to everyone at the Rock Hall.  I will continue to work hard and try to live up to the honor.”

In an interview yesterday with “Billboard“, she said her manager gave her the news . . . and then she told him, “Well, I guess I’m a rock star now.”

Asked if she’ll be performing at the ceremony, she said, quote,

“I don’t know.  If I do, I’m going to sing the hardest style rock and roll song I could ever muster up just to show that I can do it.”

And she IS still promising to do a full-on rock album at some point.  She’d like to cover Lynyrd Skynyrd’s “Free Bird” . . . and The Rolling Stones’ “Satisfaction”.

Quote, “I love Mick Jagger.  I’m hoping we’re both around long enough that he’ll come sing with me, and I may have to use The Stones to play behind me.  I might do something like that.  Get some of the classic rock bands, to back me on some of the songs I do and then do two or three or four originals.  I’d like to get in with some of the great rock groups and do some things.”

And in honor of the news, “Rolling Stone” did a list of the “Five Times Dolly Parton Went Rock.”  They went with her covers of REO Speedwagon’s “Time for Me to Fly” . . . Led Zeppelin’s “Stairway to Heaven” . . . “Lay Your Hands On Me” by Bon Jovi . . . “Shine” by Collective Soul . . . and the Beatles’ “Help”.  You can listen to each one at RollingStone.com.