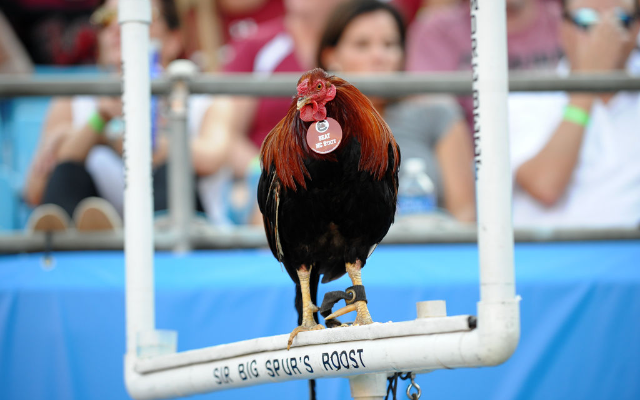 The University of South Carolina Gamecocks have a live rooster as a mascot.  And until recently, he was named Sir Big Spur.

The school had an agreement with Sir Big Spur’s original owners to use that name.  But they don’t own him anymore, and they decided NOT to let the school continue to use it because of a disagreement they have with his new owners.

So the Gamecocks are looking for a NEW name for Sir Big Spur.  One newspaper picked 10 possible choices and put it to an online vote.  So far, the runaway favorite is Cock Commander.

It currently has 79% of the vote.  Its closest competitor is Cluck Norris, with just 5%.  Other choices include Marco Pollo, Cock-a-doodle-dude, Captain Cluck, and Kickin’ Chicken.

(Check out the current voting results here.  You have to click on one to see the updated numbers.)