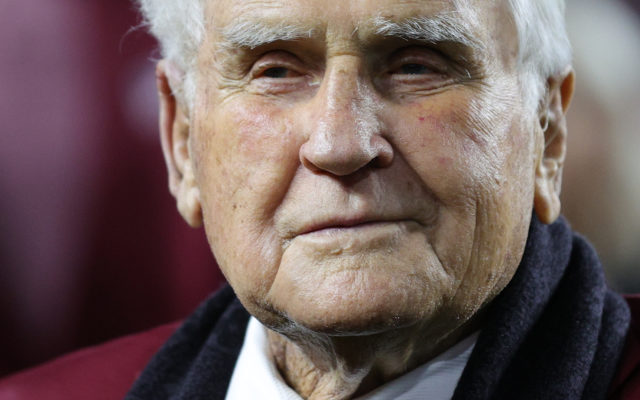 MIAMI, FLORIDA - FEBRUARY 02: Don Shula of the NLF 100 All-Time Team is honored on the field prior to Super Bowl LIV between the San Francisco 49ers and the Kansas City Chiefs at Hard Rock Stadium on February 02, 2020 in Miami, Florida. (Photo by Maddie Meyer/Getty Images)

When I was a kid Don Shula was the guy from the undefeated Dolphins.  I even had a Dolphins jacket for a couple of winters.

Every year that somebody got close to the record they’d bring him and his team out to pop the Champaign when the contender ultimately failed.

Hall of Fame coach Don Shula, the winningest head coach in NFL history, has died at the age of 90.

Shula won 347 games during a coaching career that stretched from 1963 to 1995 and is best remembered for coaching the NFL’s last undefeated team, the 1972 Dolphins.

He won two titles in Miami and also led the Baltimore Colts to two Super Bowls in the 1960s, including the infamous loss to Joe Namath and the Jets in Super Bowl III.

According to the Dolphins, Shula “passed away peacefully at his home” on Monday morning.