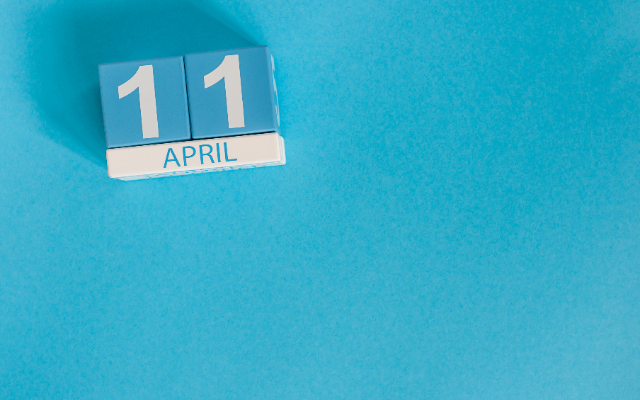 This is the only image I could find in our image library that had April in it so that's why it's here. April 11th means nothing to me.

This is not a list I put together. This is a list that is compiled and pumped out on a website that we subscribe to that is known as “prep service” site, meaning that it helps you prepare for your show so you have something, anything, to say when you crack open a mic. In fact, some of your favorite radio shows are using scripted calls from voice actors that are available on these prep service sites. Nothing is real, everything is fake, sell all your belongings and go live on a mountain.

Anyway, things to look forward to in April:

1.  In sports:  Major League Baseball gets started today . . . the Final Four is this Saturday with Baylor vs. Houston, and Gonzaga vs. UCLA . . . then the championship game is Monday . . . The Masters is next weekend . . . and the NFL Draft is April 29th.

2.  Awards season wraps up this month with the Screen Actors Guild Awards this Sunday . . . the BAFTAs a week later . . . and the Academy Awards April 25th.

3. Lots of TV is on the way this month, including some new stuff:  The “Law & Order: Organized Crime”spinoff lands tonight on NBC.  Joss Whedon’s Victorian-era superhero show “The Nevers” hits HBO next weekend . . .

That’s it. Four things. Were you looking for something else to look forward to? Sorry, it’s not going to happen. Just kidddding! April is a beautiful month and there’s a lot to look forward to. Go for a walk, look at the trees, feel the sun on your back and take a deep breath. You’re only here by the off chance that every thing that came before you happened exactly when it did. There, a hippie moment with Amy:)