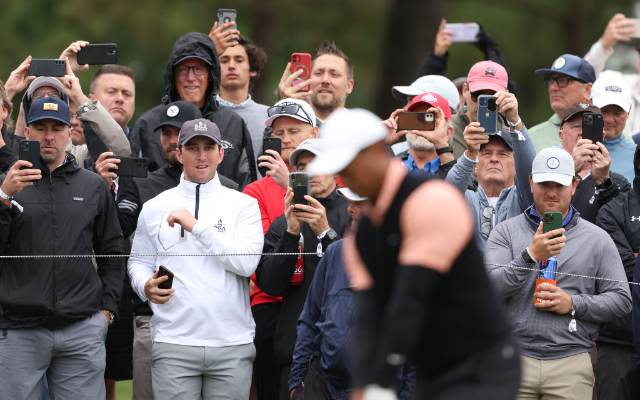 Did you see this photo that went viral last week?  On Day Two of the PGA Championship, someone snapped a picture of Tiger Woods’ second shot on the first hole.  And it went viral because all the fans behind him were on their phones filming it . . . except for ONE GUY clutching a Michelob Ultra.  (Here’s the photo.)

He was totally in the moment, focused on Tiger’s shot.  So people loved it.  And it turns out the bigwigs at Michelob Ultra did too.

They tracked him down . . . and just gave him his own endorsement deal.

They’re calling him “The Michelob Guy” and selling merch with his photo on it.  They thought it worked well with the slogan they’ve been using for a while:  “It’s Only Worth It If You Enjoy It.”  And there’s even talk of a commemorative beer can.

The guy’s real name is Mark Radetic, and he’s a certified public accountant from Kansas City.  He just did an interview with a local news channel in St. Louis and said the whole experience has been pretty crazy.

He said Michelob wants to do an entire ad campaign around him, but it doesn’t sound like he’s in it for the money.