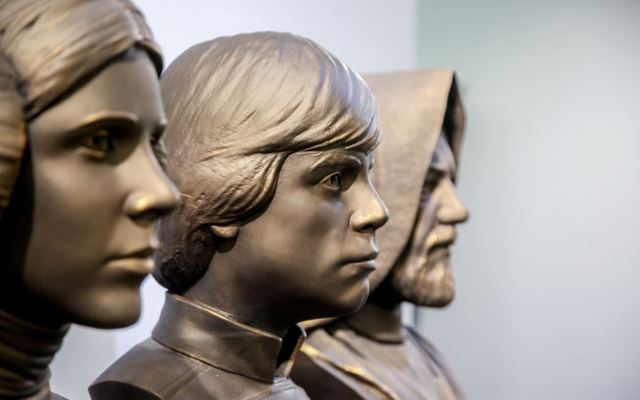 May the FOURTH be with you, on this “Star Wars” Day.  To celebrate, MentalFloss.com put together a list of 65 facts about the franchise, that might surprise you.  Here are 10:

2.  Obi Wan Kenobi was originally supposed to survive his lightsaber battle with Darth Vader in “A New Hope”.

3.  Harrison Ford’s casting as Han Solo was accidental . . . he was only around to help feed lines to actors that were auditioning . . . which included a young Kurt Russell.  George liked Harrison’s delivery the best and put him in the role.

5.  In early drafts of the screenplay, Yoda’s name was Buffy . . . which turned to Minch Yoda . . . then eventually just Yoda.

6.  11-year-old Warwick Davis was originally an Ewok extra, but he got cast as Wicket after Kenny Baker, who also played R2-D2, got food poisoning.

7.  Benicio Del Toro was supposed to play Darth Maul.  He dropped out after most of the lines were cut . . . but he did appear in “The Last Jedi” as the character DJ.

8.  A young Han Solo was supposed to be in “Revenge of the Sith”.

9.  “The Force Awakens” has many cameos like Bill Hader, Daniel Craig, and Simon Pegg.

More about:
may the fourth
Star Wars