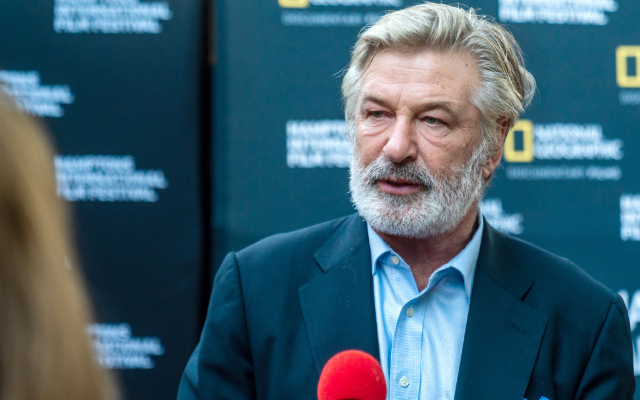 The gun was supposedly safe, but clearly it was not.  There are still a LOT of unanswered questions, but here are 10 updates from over the weekend.

1. For starters, Alec posted this comment on social media:  Quote, “There are no words to convey my shock and sadness regarding the tragic accident that took the life of Halyna Hutchins, a wife, mother and deeply admired colleague of ours.

“I’m fully cooperating with the police investigation to address how this tragedy occurred and I’m in touch with her husband, offering my support to him and his family.  My heart is broken for her husband, their son, and all who knew [her].”

3.  Some photos made the rounds not long after it happened, of Alec after the shooting.  He looks distraught.

4.  Alec is canceling all his other upcoming projects.  Sources say he’s looking “to take some time to himself and re-center himself.”

5.  It’s still unclear exactly how this happened, but local authorities say that the assistant director Dave Halls handed the gun to Alec moments before the shooting and said, quote, “Cold gun.”

A “cold gun” means there are no cartridges . . . including blanks . . . inside the firearm.  A “hot gun” indicates the weapon is loaded with cartridges, either live ammunition or blank rounds. However, it reportedly DID have live rounds in it . . . not just “blanks,” which are gunpowder charges that produce a flash and a bang but no projectile. Halls hasn’t commented . . . but it’s probably safe to assume that he also didn’t realize the gun was loaded.  That said, the first assistant director is supposed to personally verify whether a weapon is “hot” or “cold.”

6.  In addition to Halls, investigators are going to want to talk with Hannah Gutierrez-Reed, who was the movie’s “armorer.”  That’s the person who’s responsible for managing all the firearms used on a film set . . . ensuring the weapons are clean, correctly loaded, properly kept up, and safely handled.

Prop gun experts told “The Daily Beast” the armorer is usually ultimately responsible for the weapons on set.

7.  The 911 calls from the shooting have been released.  (Here’s the UNCENSORED audio.)

8.  It’s unclear exactly how everyone was positioned, but it sounds like they were rehearsing when the shot was fired.  It’s possible that Alec’s character was aiming the gun toward the camera, where the cinematographer and director were.

9.  Director Joel Souza is expected to make a full recovery . . . and he’s already been released from the hospital.  He said he’s “gutted by the loss of my friend and colleague Halyna Hutchins.”

10.  According to the “Los Angeles Times“, about half a dozen members of the camera crew on “Rust”had walked out hours before the tragedy after protesting over working conditions on the set.  Some issues were about long hours and long commutes . . . but at least one person complained about gun safety on the set.